Skip to the content
Home
|
Tattoo
|
Samurai Tattoo: Everything You Need To Know

If you’re thinking about getting a samurai tattoo, you should know what to expect and where you should put it. If you’re planning on getting it on the forearm, here are some things to consider. Symbolism and Meaning of a Samurai Tattoo 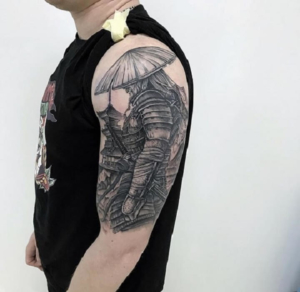 A samurai tattoo is a great way to represent your strength and honor. This Tattoo is one of the most popular Asian designs. It can represent a number of things, such as your pride in being a warrior or the honor you feel for your ancestors. It can also represent your loyalty to a lord. 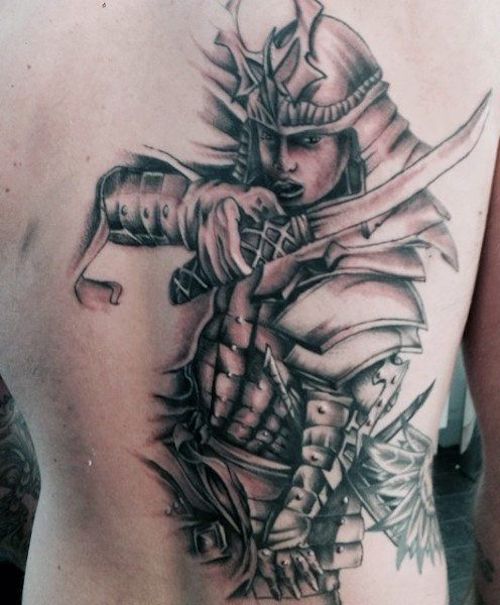 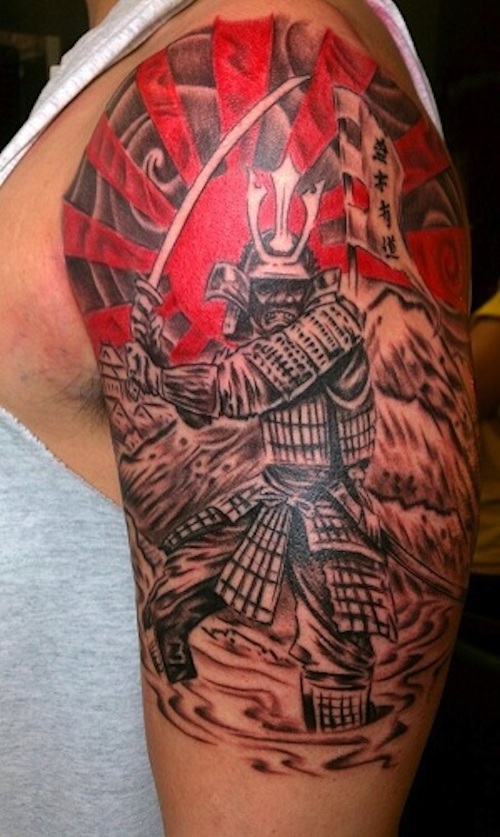 Samurai tattoos represent many things, including the yin and yang symbols, which complement each other as a whole. Other samurai Tattoo designs can be images of the Japanese fan, Fuji Mountain, and koi fish. These can all symbolize things that are sacred to samurai. 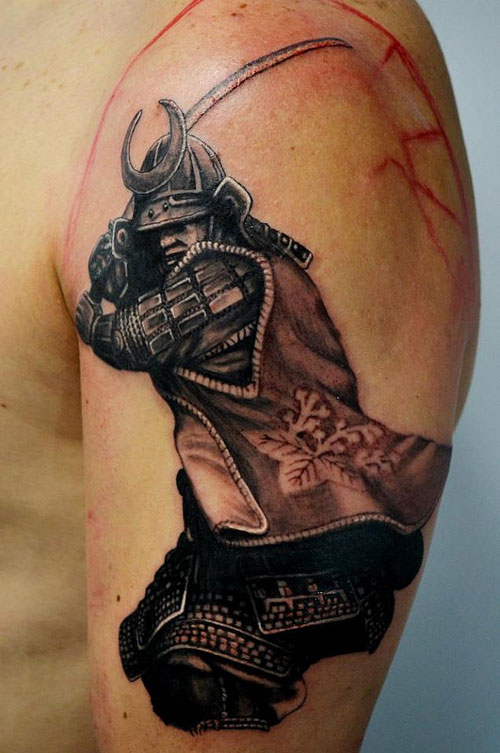 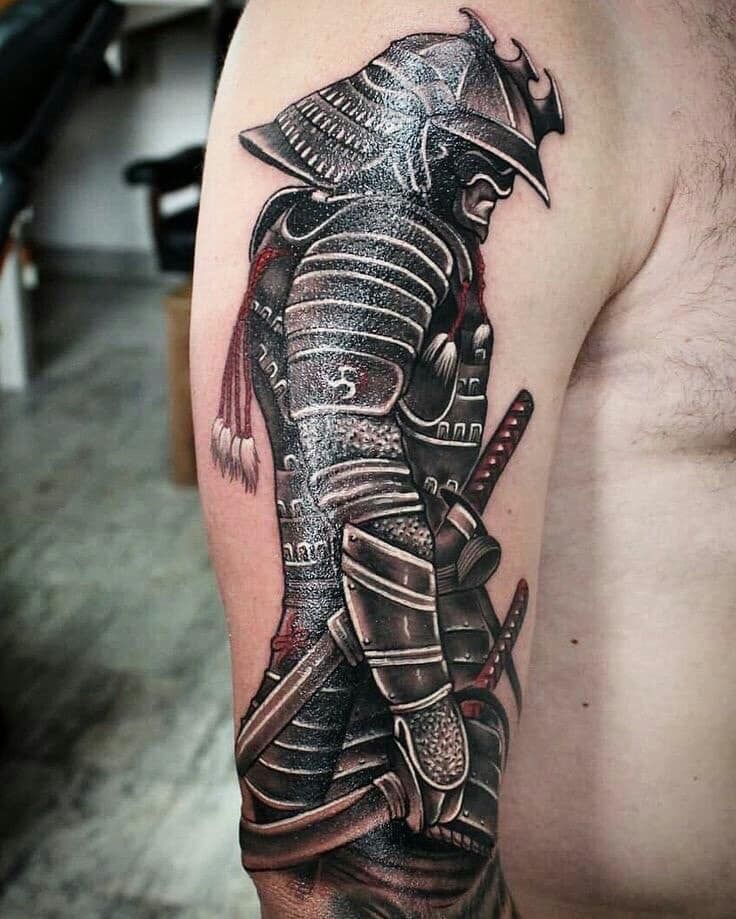 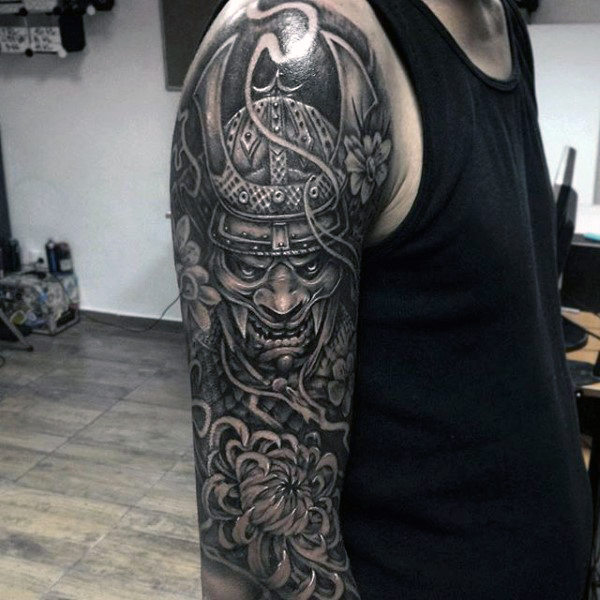 The samurai Tattoo is an excellent way to display your respect for the Japanese culture. Originally, samurai warriors wore leather armor, but later changed to iron plates. They also wore a helmet called a kabuto, which they used for protection. In addition, they wore a yoroi, which is made of leather scales. However, with the introduction of firearms, these helmets became made of iron. 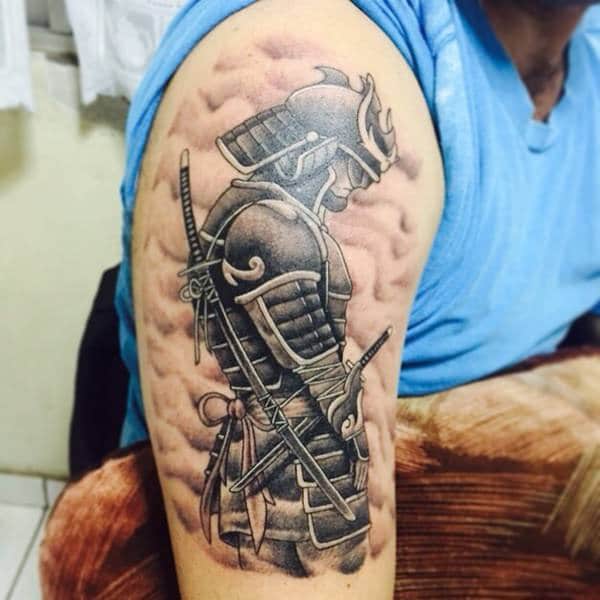 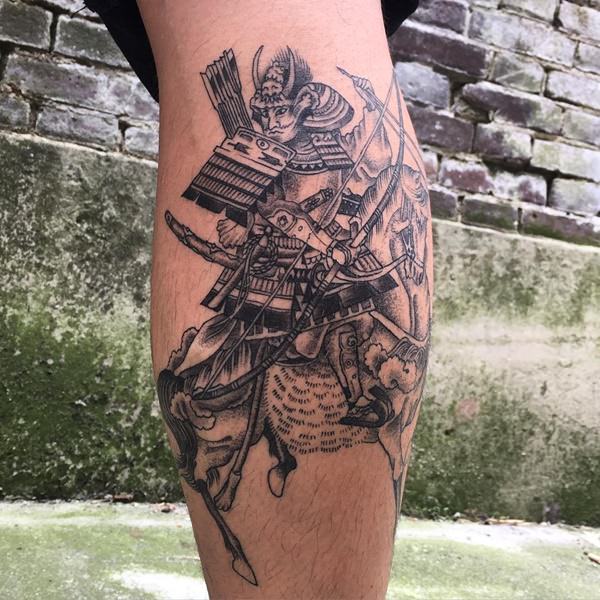 Samurai tattoo designs are commonly found on the upper part of the body. Some samurai Tattoo designs incorporate elements of war-time clothing, including helmets, hoses, and swords. These designs can be very detailed, so you should be sure to choose an artist who has experience working with these designs. It’s also important to research the tattoo’s meaning before choosing it. 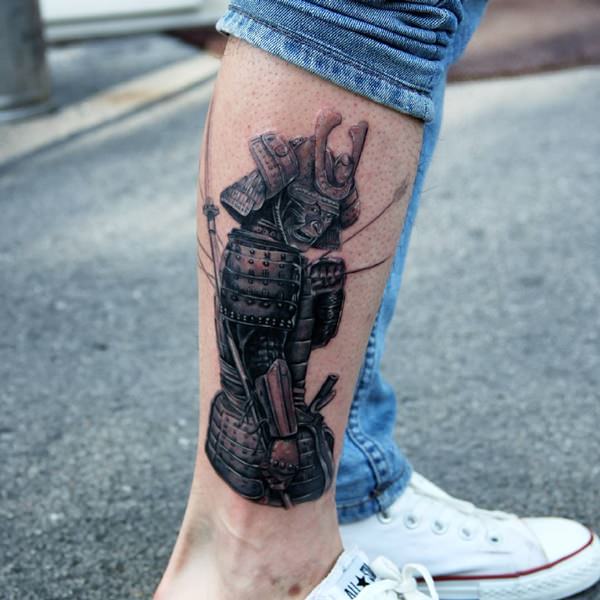 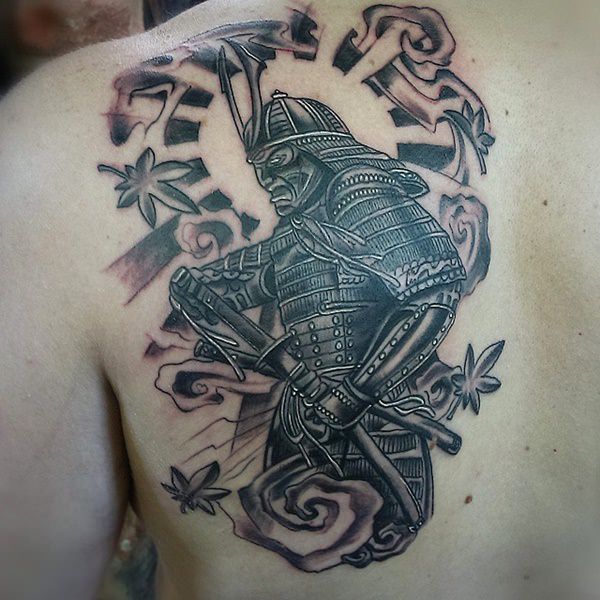 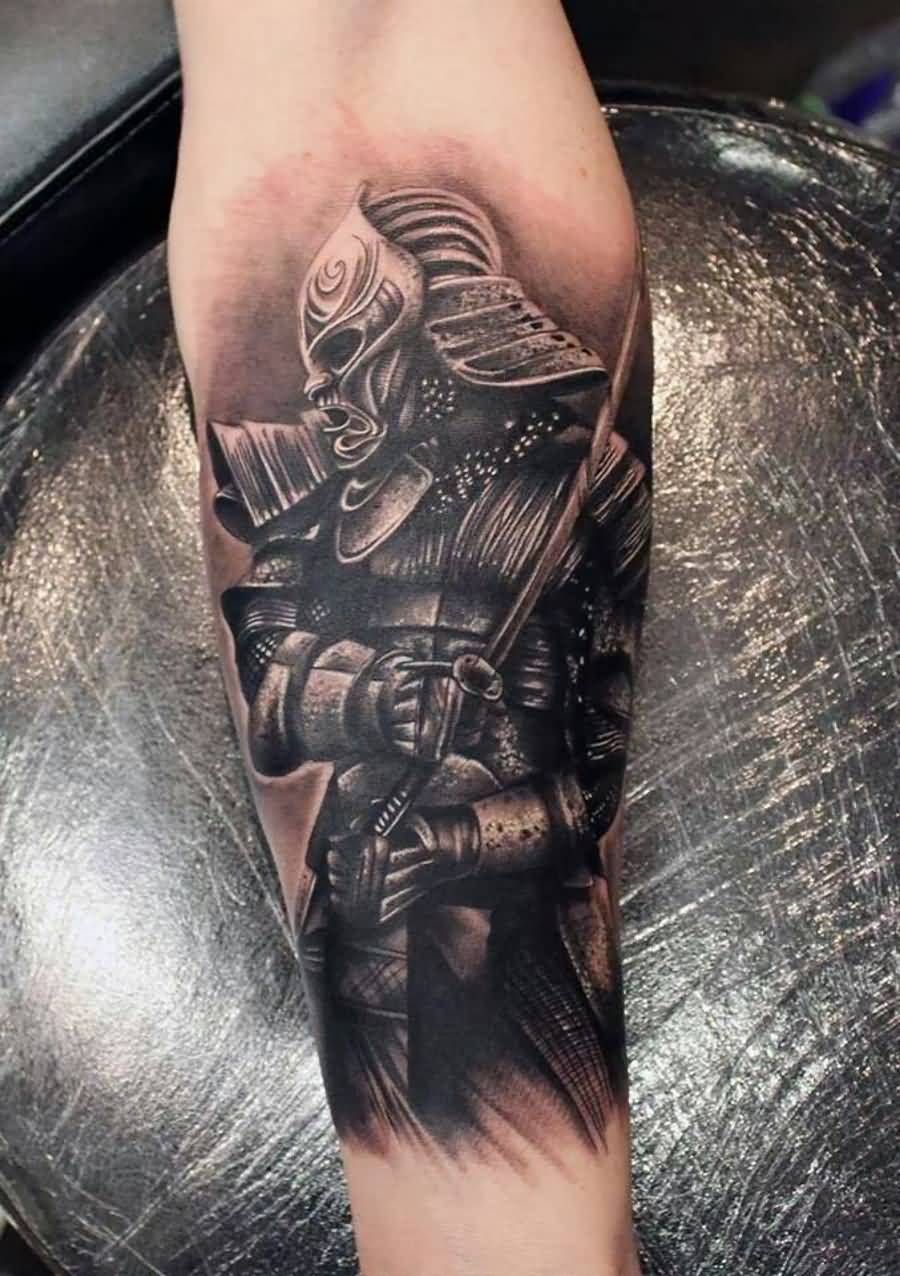 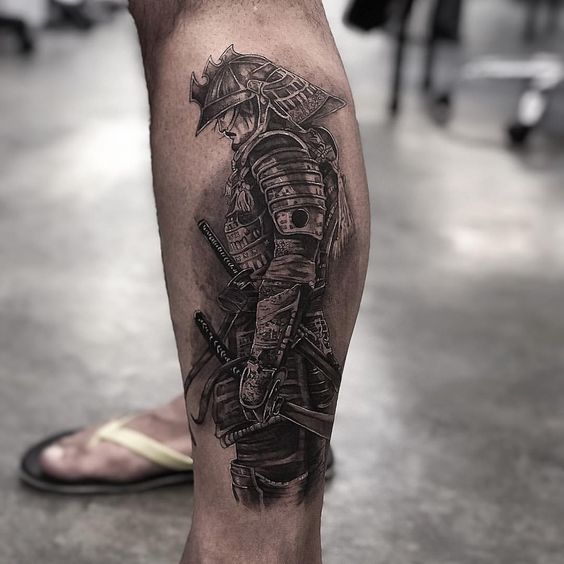 Samurai tattoos are full of symbolism. These tattoos were popular in the Japanese culture for many years and have many meanings. Some people choose a samurai Tattoo to represent their strength and courage. Others choose to show their love for samurai culture and choose to have one. Either way, a samurai tattoo is a great idea for a sleeve tattoo. 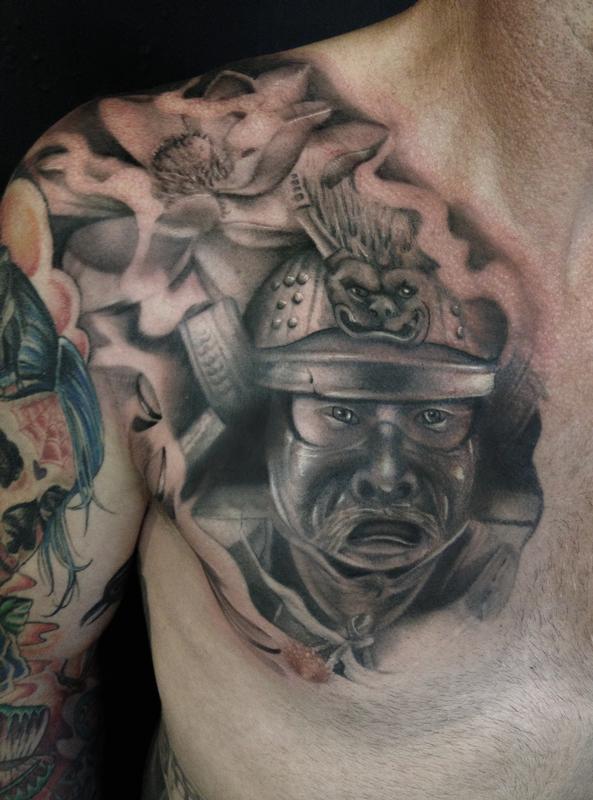 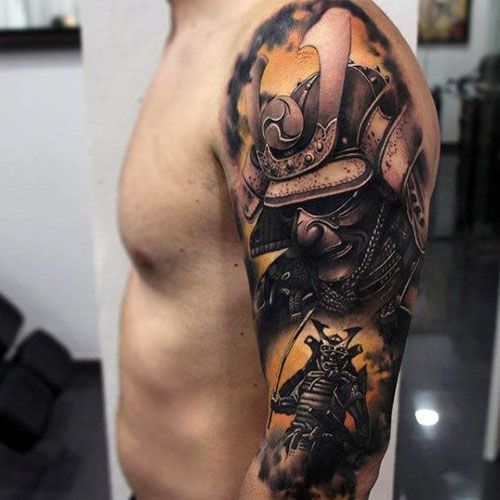 The meaning of a samurai tattoo varies with each design, but some common elements are a dragon and octopus. You can also find samurai tattoos with koi fish. Adding these elements can make the tattoo even more meaningful. 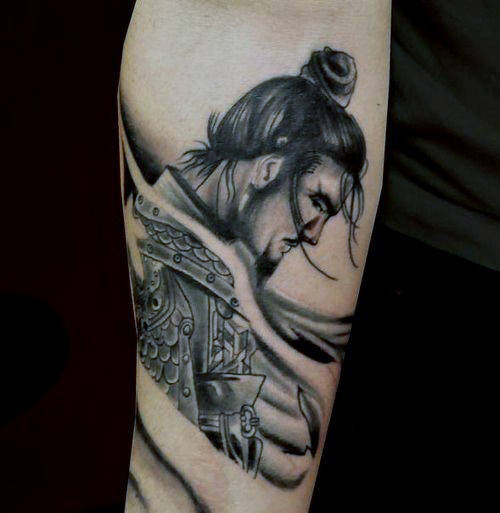 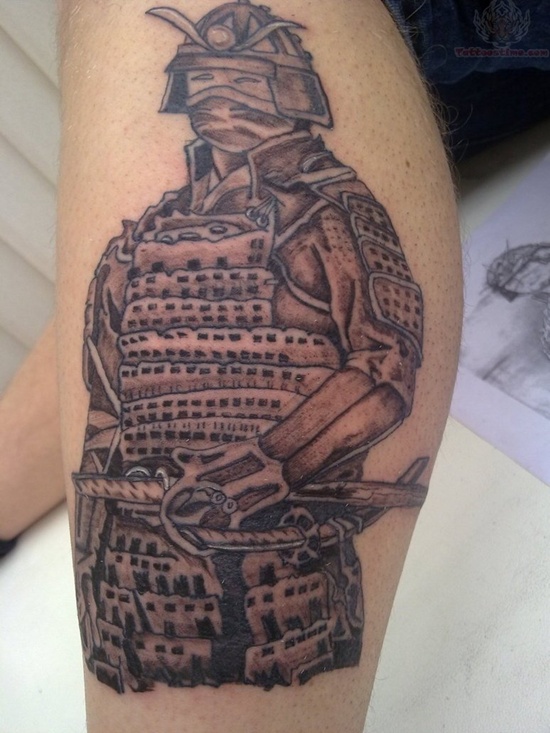 In Japanese culture, samurai tattoos represent warriors who stand fearlessly against death. They are a symbol of a warrior’s devotion and the dedication to protecting the nobility. Men typically opt for samurai tattoos, but women can also get them. Samurai tattoos can signify honor and discipline, and they’re a great choice for those who value family and culture. 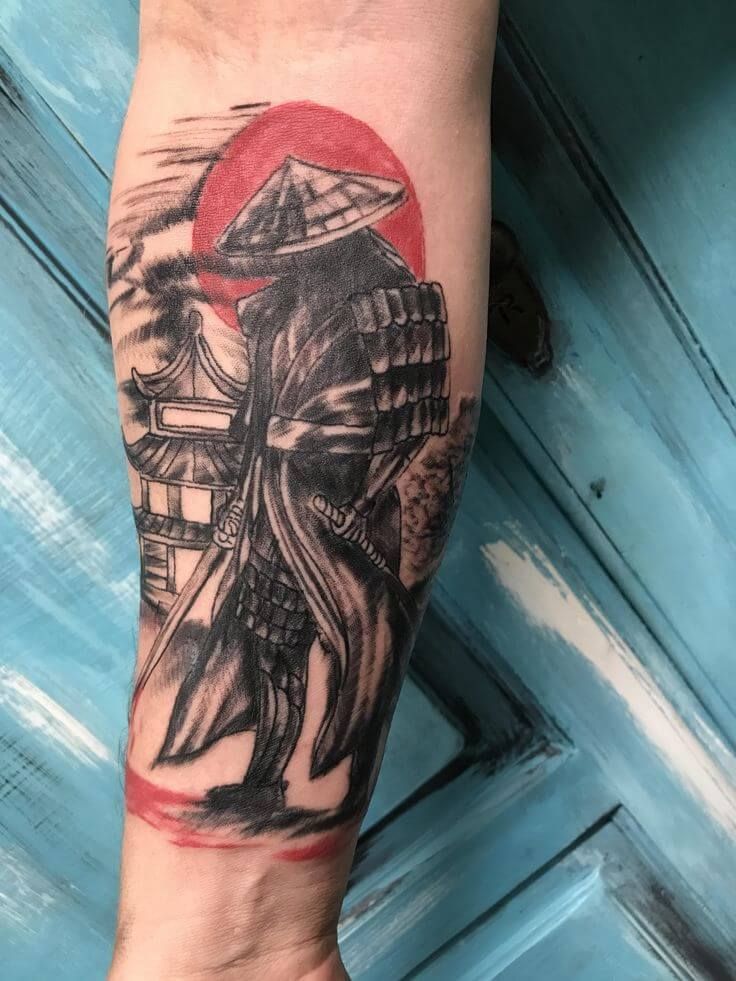 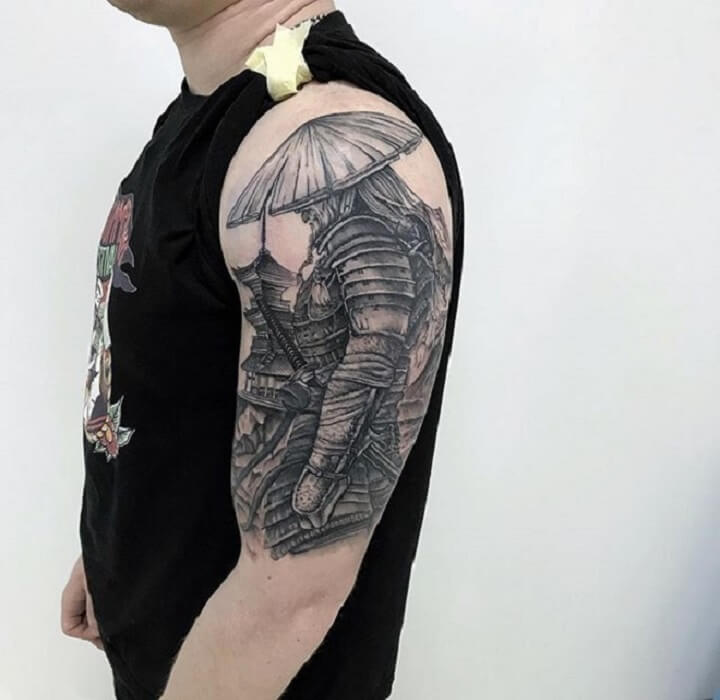 A samurai tattoo can have a meaning that is related to the history of Japan or the country itself. Some samurai tattoos depict giant temples. These temples were used by warriors for training and as burial grounds. As such, a samurai tattoo with a temple on it is a tribute to these warriors. 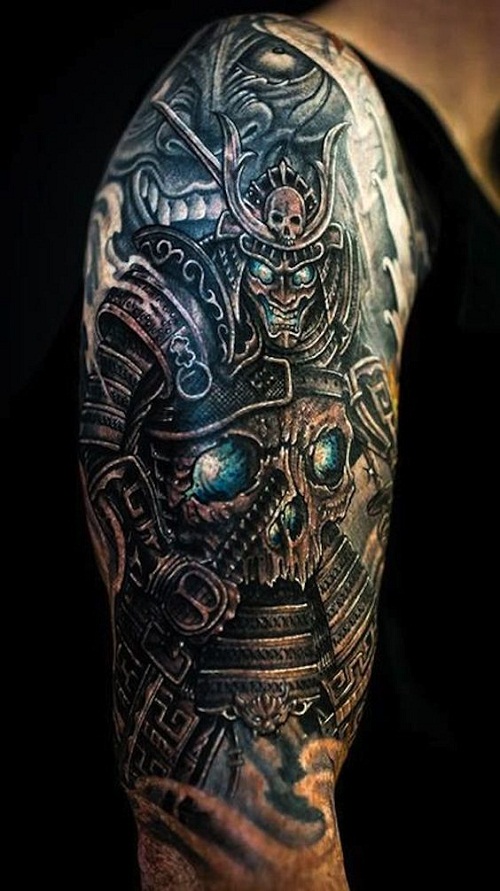 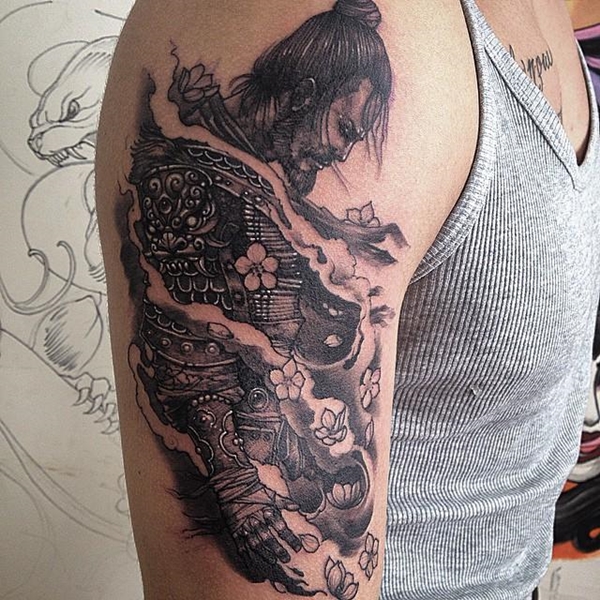 Tigers are another symbol of courage and strength. Tigers are not native to Japan, but are commonly found in Japanese mythology. In addition to being a symbol of courage, tigers are thought to drive away demons and protect from disease and misfortune. A samurai tattoo may also depict a lion and a dragon. When combined together, these two symbols represent the dual nature of all things. 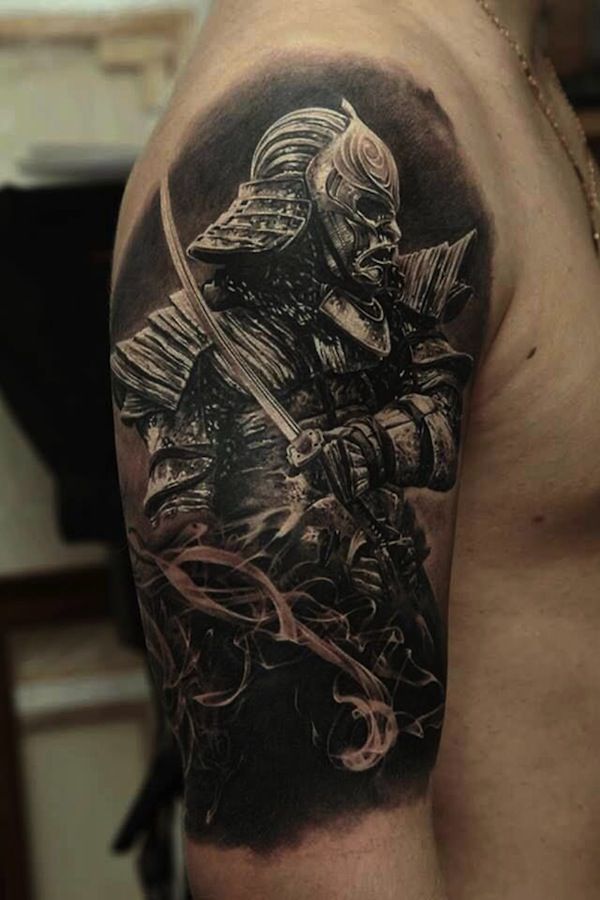 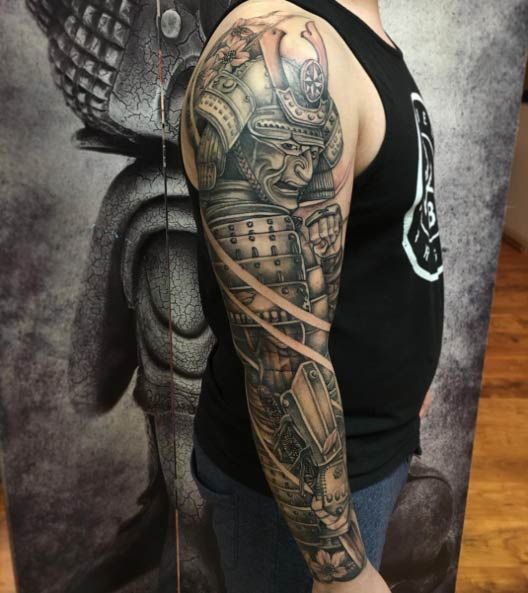 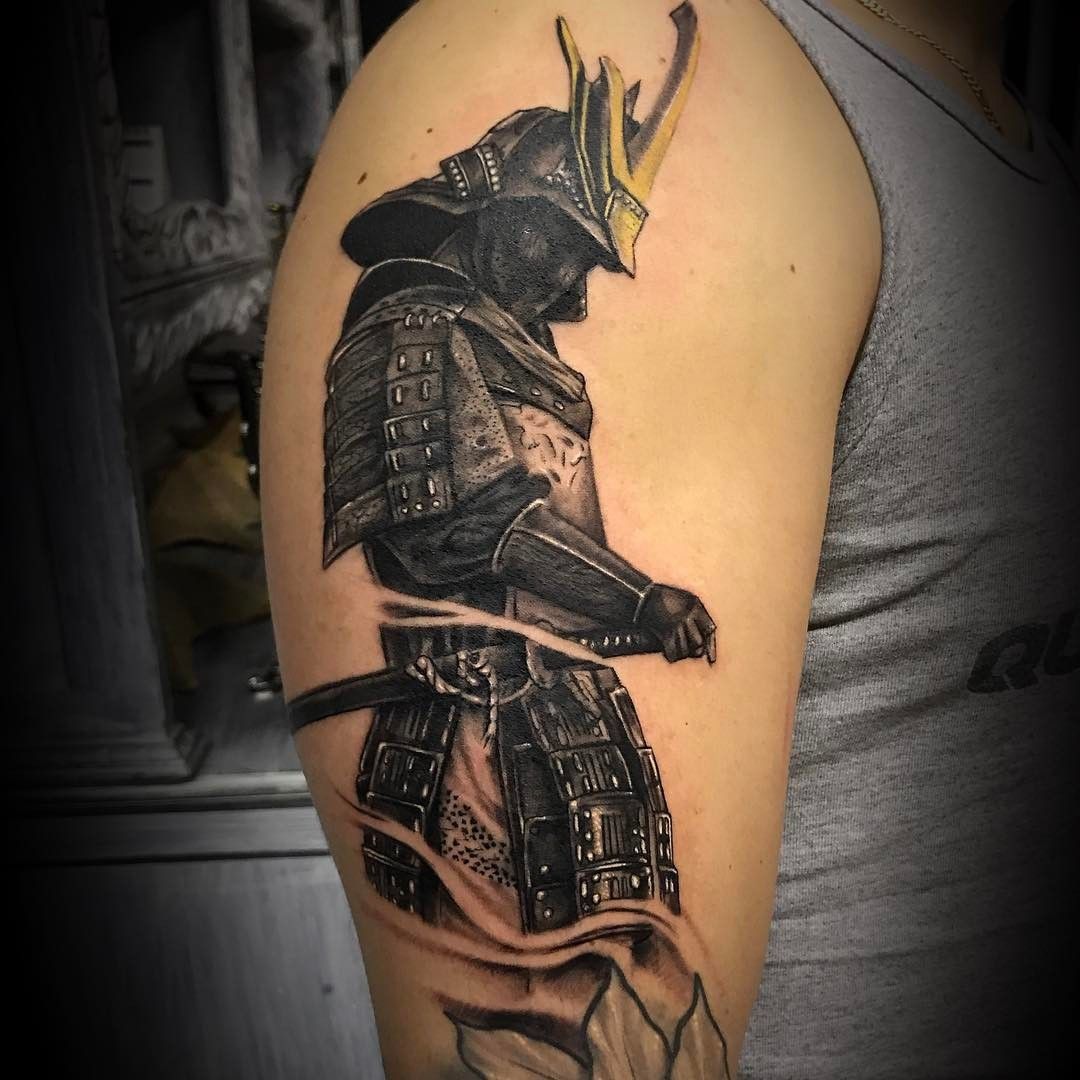 A samurai tattoo is a symbol of honor and strength. It has many meanings, and the design can be a part of an incredibly unique tattoo. It can include a variety of elements and symbols, and it is perfect for a full-sleeve tattoo. 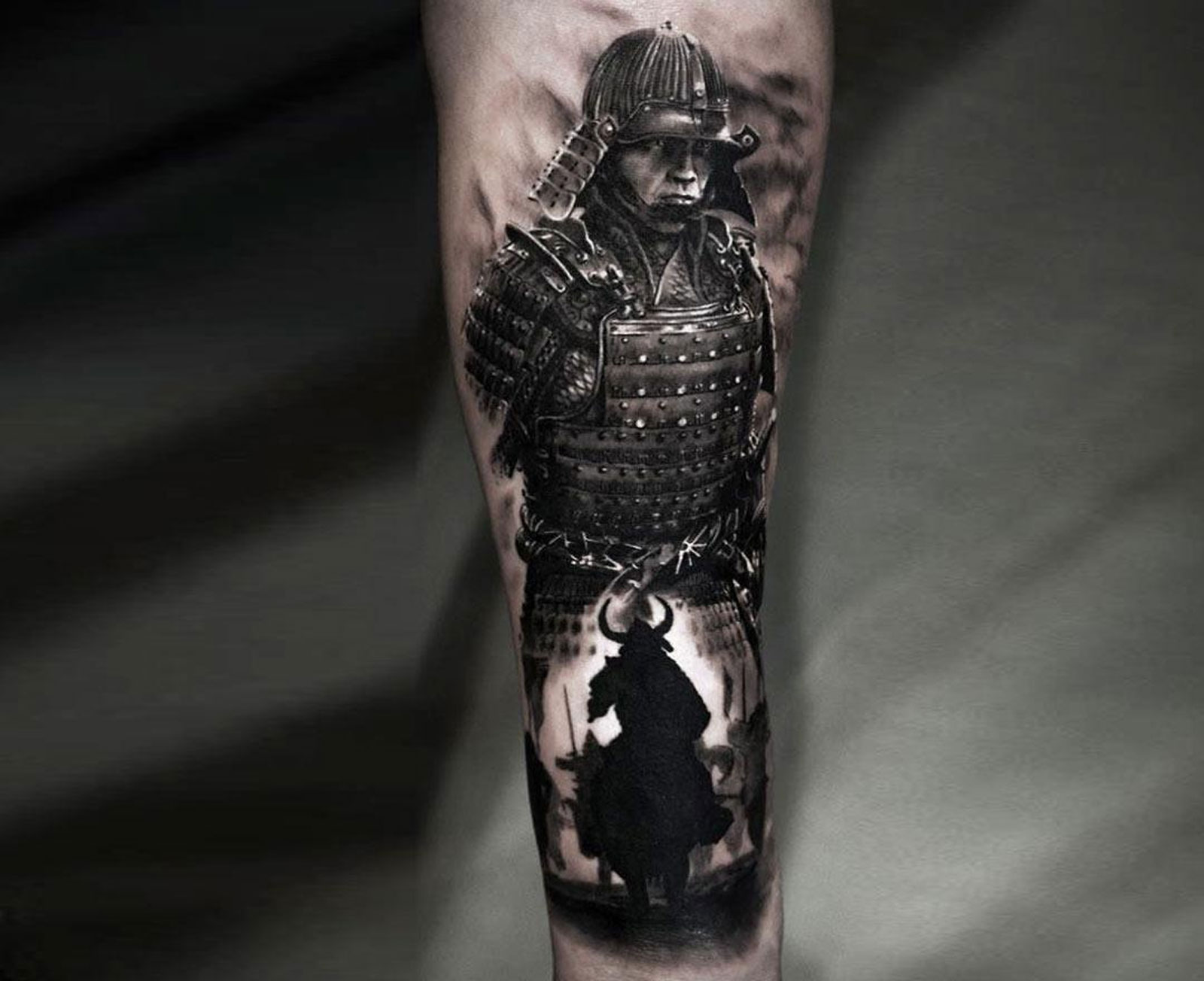 The samurai tattoo on my forearm shows the side face of a samurai. It shows the samurai’s left eye, which represents his anger and courage. The tattoo artist used a black and white ink combination to create a realistic look. The samurai’s teeth are large and protrude from the face.

Samurai tattoos are very popular. Samurai tattoo designs have several meanings, including honor and loyalty. They are often large, and are filled with important Japanese imagery. Those with a strong will and a fear of death may choose to place their samurai tattoo on their forearms.

Symbolism of a samurai tattoo

If you are looking for an elegant tattoo that represents your warrior heritage, you should choose a samurai tattoo design. This tattoo is a powerful choice, and it can be used by both men and women. Its placement is ideal over the torso, but it can also be placed on the leg or knee.

Samurai tattoos can be made of many different colors and styles, and can be large or small. They often feature a warrior symbol, or a symbol of strength, honour, or piousness. They are also often depicted with a skull, which represents a samurai’s fierceness and skill in the face of evil.

Another option for a samurai tattoo is to have it paired with an animal. A tiger, for example, would look perfect next to a samurai tattoo. It would display a warrior’s inner convictions and beliefs.

Symbolism of the samurai oni mask

The oni mask is an iconic Japanese cultural symbol. It is believed to ward off evil spirits and give the wearer strength in battle. It was first created in the Edo period of Japan. These demon-like masks are often painted in vivid colors and adorned with exaggerated demon designs. One type of oni mask is the Hannya Mask, which represents a woman possessed by an evil spirit. It is usually red or black in color and worn by actors portraying evil characters.

Historically, the oni was a mythical demon. Although it was once a symbol of evil, today the oni is considered a powerful symbol of Japan. Its powerful symbolism has earned it a place among the world’s most powerful masks.

Oni masks were originally worn by samurai to intimidate enemies. While it served a dual purpose – to frighten off opponents – they were also worn to protect the wearer’s identity. Because oni masks would obscure the wearer’s features, they made themselves more difficult to identify.

The oni mask has several meanings and is used by many different types of people, including samurai, noh actors, and people in the arts. Its most famous use is in Noh theater. It is also commonly used in Shinto festivals. Some people believe wearing the mask will bring good luck and prosperity.

The oni mask is worn to ward off evil spirits. The story of the oni is a Japanese folk tale and was passed from generation to generation. It is still widely popular and there are even festivals celebrating the Oni tale. A typical Oni costume contains a straw robe, a pair of Oni boots, and a red horned mask with jagged teeth. 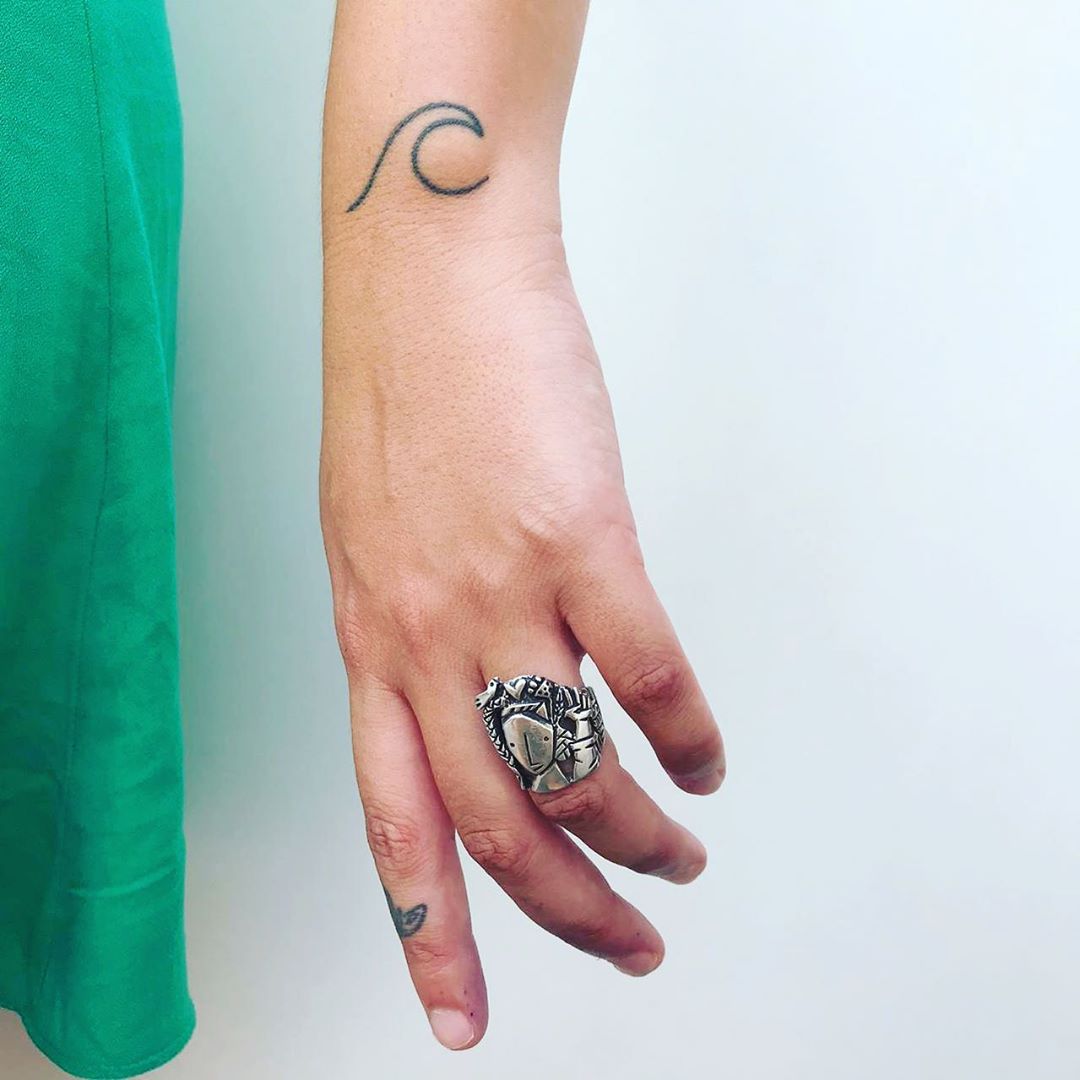 Wave Tattoos For Women – Create Your Own 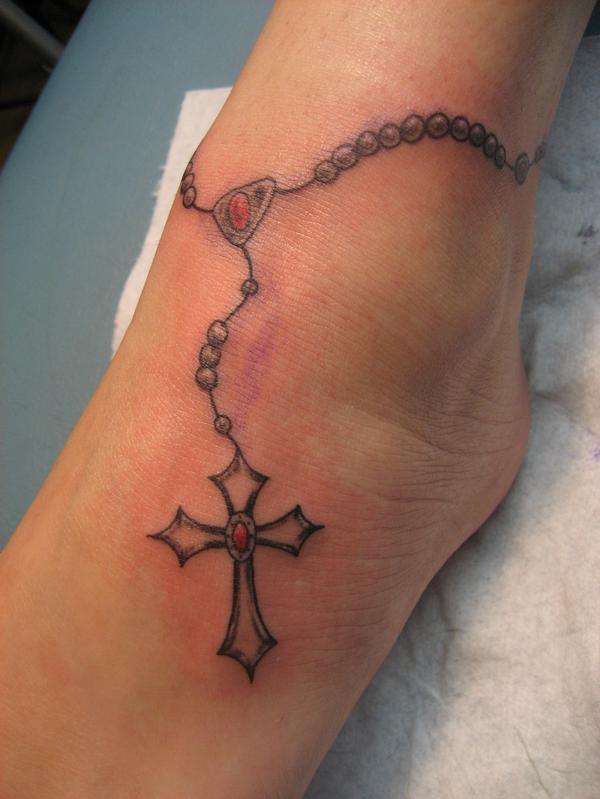